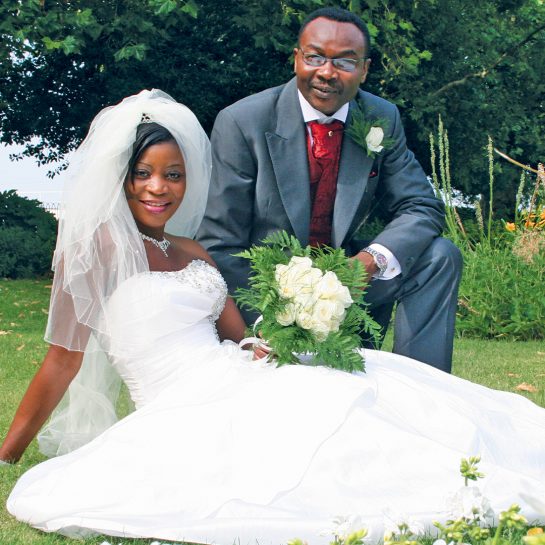 “Besides the sadness I was in after my failed marriage,” says Jimmy Sowunmi, “I developed a habit of drinking alcohol and using drugs that affected me for years. The very idea of love and relationship was something that terrified me. I was alone for many years and even after receiving guidance at the Universal Church and finding the willpower to overcome my bad habits, I still couldn’t bring myself to face the issues regarding love.

However, I decided to fight for my love life, as I did for my deliverance. What instigated the change I needed was a message I heard on how I could change myself and prepare my heart and mind for marriage.”

With each month that passed, Jimmy’s fears became smaller until it vanished altogether. With that out of the way, he was now ready to move forward. He didn’t know that his wife to be was doing the same thing.

Maria, like Jimmy, came to the church with a lot of unresolved emotional baggage. Her impending marriage ended abruptly before it even began – Maria’s fiancé died unexpectedly.

“I felt as if my world had just collapsed,” she remembered. “I became like a living dead. I walked around in a daze, not knowing what to do with myself. I refused to have anything to do with love and purposely made myself ‘the unmarried black sheep’ in the family. I remained like that for 11 years. I was young, with my whole life ahead of me, but I just couldn’t see that – up until I started attending the Universal Church.

I think what I received in the first days was a hope that things could change for me. I was afraid to love someone only to lose them again, but inside, I didn’t want to feel like that, so I decided to give love another chance. The first person I allowed into my broken heart was the Author of love Himself — God. With each message, it was as if the walls that I had built around myself fell one by one. With the new understanding that I wasn’t created to be alone or unhappy, I gave myself time to heal. Soon, an event similar to the ‘Day of Decision’ was announced. This was my opportunity and I went for it.”

Both Jimmy and Maria wrote a prayer request detailing the attributes they desired in their partner. Their faith was, “I will do my part…” said Maria, “…and God will do what I cannot do” concludes Jimmy. “I still remember the day Jimmy spoke to me,” says Maria. “It was outside the church and we hit it off straight away.”

Jimmy says: “I’d seen her around for some time, but this time something was different. I wanted to get to know her, so…” “… he decided to ask me out and I said, yes”, Maria said smiling.

“We dated for two years before Jimmy proposed. On my wedding day, I opened a copy of the letter I brought to the event and I noticed that not only had God honoured my faith, but all the characteristics I wrote in the letter matched Jimmy’s. Our lives were full of sadness and past traumas – love was the last thing on our minds – but today we are happily married and inseparable!”