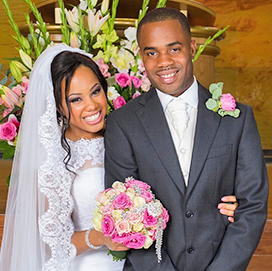 DANIEL: “My parents split up when I was very young and coming from a broken family took a toll on me. This family background on top of the area I lived in became a recipe for disaster. I’m from South London where there are lots of gangs, so I soon got involved with the wrong crowd.

Gang members became my family and this landed me in situations that I never thought I would be in: getting involved with drugs, fighting, handling knives and robbing people. We created trouble everywhere we went.

On a particular occasion, I almost lost my life. I had an altercation with a guy who owed me some money.”

Meanwhile, on the other side of the city, Gemma’s life was the opposite of Daniel’s. Although she also had family problems, she found solace in a completely different source: God.

GEMMA: “I was a baby when my dad died by suicide. Although my mum did such a great job being both mother and father, every now and then I would get extremely angry. I had serious fights with my siblings and stepfather, and I longed for my real father, thinking that if he were here, things would have been different.

It was when they started attending the Universal Church that I noticed a huge difference in their relationship, so I decided to also start going to the church. From the first few meetings, I knew it was exactly what I needed. I learnt that my grudges were just destroying me, and with the help of the advisers, I was gradually able to get rid of all the negative feelings and develop a relationship with God.”

It was through a friend’s invitation that Daniel and Gemma’s paths crossed.

DANIEL: “A friend of mine invited me to the Universal Church and at first, I rejected his invitation, as I was not sure about this ‘church thing’. But after having a good think about my life, there was no denying that I needed help, so I decided to go.

My first experience was so surreal; it was such a positive environment. Some of them had come from the same background as me but were able to turn their lives around, so I decided to follow the steps they took to have that same transformation. I was advised to focus on myself and change everything that was not positive in my life. It was not an easy process as I had to turn my back on my old friends and lifestyle, but I was determined.

As I persevered, I started noticing changes in my mindset, my actions and even the way I expressed myself. I can say that I became a new man.”

By now, both Daniel and Gemma had overcome their inner issues and developed a strong relationship with God. The foundation for a positive life was set, but there was still something missing: someone to share their happiness with. The last thing they imagined was that they would become life partners.

DANIEL: “We had completely different personalities. But people would say: ‘Ask her out for a coffee, talk to her’ and I decided to do it, to get to know her better.”

“I had a vision of how my husband would be and to me, that person was not Daniel. But deep down something kept telling me that he was the one – I believe it was God guiding me. So, he asked me out for a coffee and that day I was able to know who he really was.”

“From that day on, we were both sure that we were the right person for each other, but we decided not to rush things. We were attending the Love Therapy seminars where we learnt that we could not be completely guided by our hearts in our love lives: we had to practise an intelligent kind of love.

Normally, people make plans for all areas of their lives except their love lives, but we wanted to have a steady relationship, so we wanted to do things right.

We believe that all of the principles we learnt and put into practice have helped us avoid many issues. Putting in the work and sacrifice beforehand has definitely paid off and together, we have built a beautiful life.

Every area of our lives has been blessed as a consequence.”