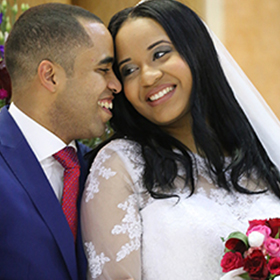 Carlos Peixoto: My friend showed me a video from an event that she was in and, every time she came on screen, I told him to stop and asked who she was. I thought she was beautiful! I met her for the first time a year later at another event.”

Liliana Peixoto: “I noticed Carlos and thought that he seemed nice. Later on, when we talked for the first time, he greeted me as though we already knew each other. I was slightly taken aback; he seemed very confident in his approach.

Our relationship began as a friendship. We didn’t jump right into dating. We first took the time to get to know one another. I believe that if you start with friendship, then you get to know the person on a deeper level.

You get to see the way they interact with other people and if they are comfortable around you.

I realised that he was the one for me because of his determination towards me. I wasn’t interested in him straightaway, but he was patient, confident, and very sure of himself. I also liked the way he treated his mother and his sister. I believed that the way he was with his family would also reflect on how he would treat me.”

Carlos: “Liliana is very trustworthy; this is what drew me to her. I learned that there was a moment in her life where she had to take responsibility for her entire family and for me, which became an important factor. As we spent more time together, I learned that she was very responsible. I had always said that if I were to marry, I would marry a woman who is respectful, and that is exactly how Liliana is towards me. We never take long to reconcile if we have a disagreement.”

Liliana: “One thing I love about marriage is knowing that I will get to see Carlos when I get home if I haven’t seen him the whole day. However, when you are dating, you have to say goodbye to the person at the end of the date.”

Carlos: “The main reason behind our successful relationship is that we are real with each other; we are very open, and this creates a bond of friendship. We are never afraid to tell each other what is on our minds. Some people look at us and think we are brother and sister because we have such an honest relationship, and we are not afraid to be open with each other. We always communicate with honesty.”